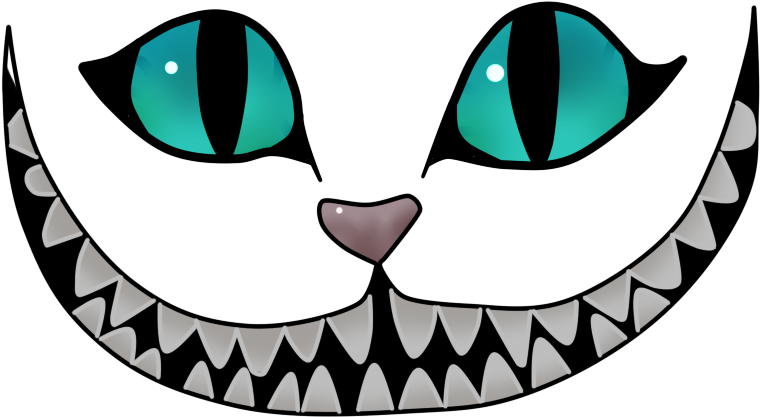 The Cheshire Cat is a fictional cat who first appeared in Lewis Carroll’s Alice’s Adventures in Wonderland and is famous for its naughty smile. The link of a “Cheshire cat” with grinning predates the 1865 novel, and is currently most typically used in Alice-related settings. It has moved beyond the domain of literature and into popular culture, with examples ranging from political cartoons to television, as well as cross-disciplinary studies ranging from business to science. The Alice-style Cheshire Cat is known for its periodic progressive disappearance of its body, leaving just its famous smile as a last visible sign.

The Cheshire Cat is most commonly associated with Lewis Carroll’s classic Alice’s Adventures in Wonderland, which has a figure of the same name. The Cheshire Cat first appears in Alice’s kitchen at the Duchess’s house, and subsequently on the branches of a tree, where it appears and vanishes at whim, engaging Alice in delightful but occasionally baffling dialogue. The cat annoys or perplexes Alice at times, but appears to cheer her up when it appears unexpectedly at the croquet field of the Queen of Hearts; and when sentenced to death, the cat perplexes everyone by making its head appear without its body, sparking a debate between the executioner and the King and Queen of Hearts about whether a disembodied head can be beheaded. The cat eventually vanishes, leaving just its grin behind, prompting Alice to remark that “she had often seen a cat without a grin but never a grin without a cat.”

The 16th century sandstone carving of a grinning cat on the west face of St Wilfrid’s Church tower in Grappenhall, a village 4.9 mi (7.9 km) from Carroll’s birthplace in Daresbury, Cheshire, may have inspired the name and expression of the Cheshire Cat.

“I noticed a Cheshire cat with a giant smile carved into the wall at Brimstage,” Carroll wrote in his memoirs. This refers to a rough-cut corbel that resembles a smiling cat in Brimstage Hall, Wirral (formerly in Cheshire). Another source of influence for the character may be this.

Reverend Charles Dodgson, Lewis Carroll’s father, served as Rector of Croft and Archdeacon of Richmond in North Yorkshire, England, from 1843 to 1868, and Carroll lived there from 1843 to 1850. Some historians believe a sculpture in Croft church inspired Lewis Carroll’s Cheshire Cat in Alice in Wonderland.: 62

A British Shorthair that has reached full maturity.
Carroll spotted a representative British Shorthair portrayed on a Cheshire cheese label, which might have been another source of inspiration. “When gracelessness is seen, the British Shorthair is suitably ashamed, rapidly rebounding with a ‘Cheshire cat smile,” according to the Cat Fanciers’ Association profile.