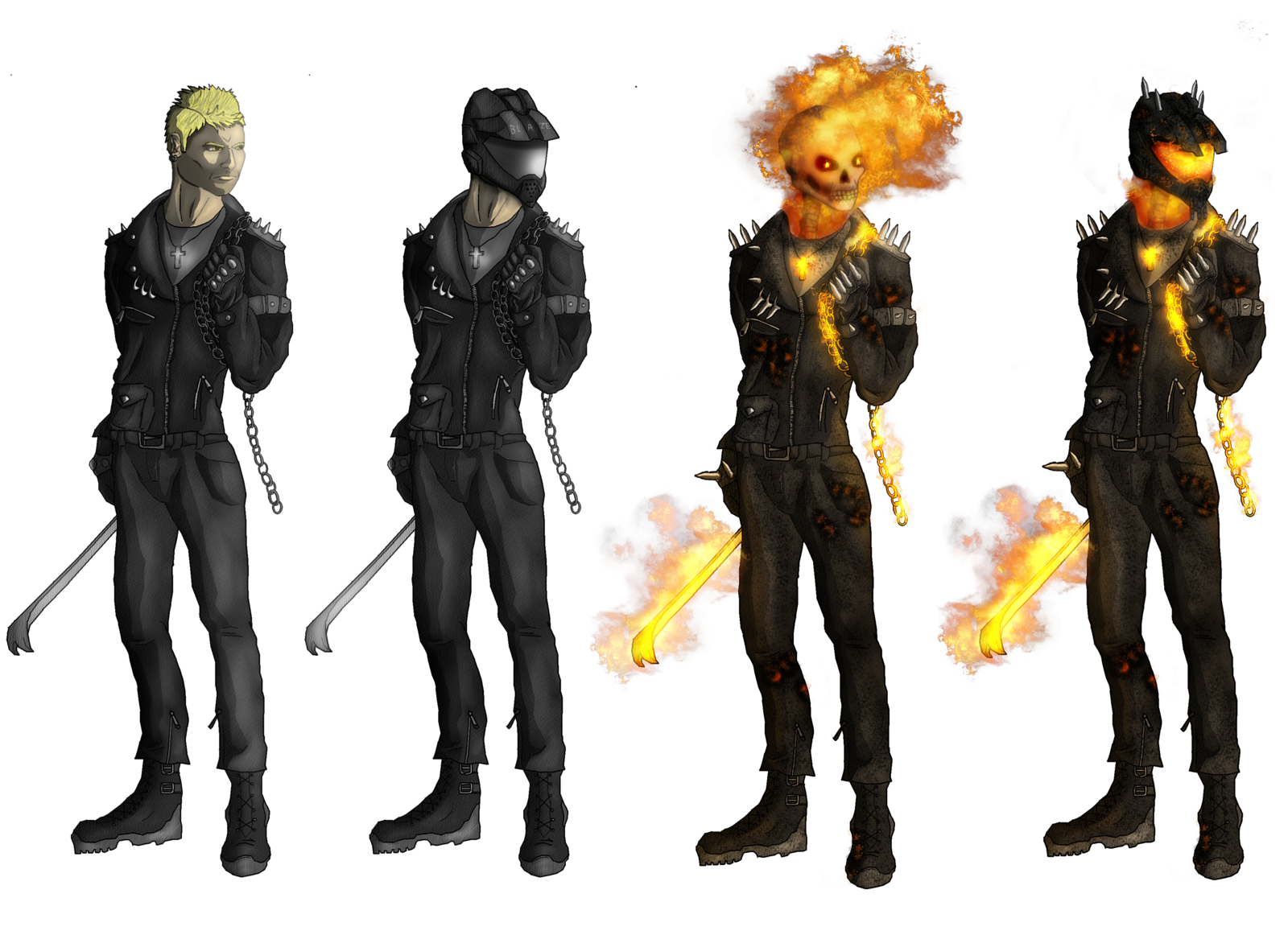 Many antiheroes and superheroes with the name Ghost Rider have appeared in American comic books published by Marvel Comics. The term had already been used by Marvel for a Western character who was eventually renamed Phantom Rider.

The first supernatural Ghost Rider is stunt motorcyclist Johnny Blaze, who promised to sacrifice his soul to “Satan” in order to save his father’s life (later revealed to be an arch-demon named Mephisto). Blaze’s flesh is eaten by hellfire at night and when he is near evil, turning his head into a fiery skull. He rides a burning motorbike and fires hellfire blasts from his torso, most often from his skeleton hands. He finally discovers that he is linked to the demon Zarathos. From 1972 through 1983, Blaze was a character in the Ghost Rider series.

Danny Ketch was introduced as a new Ghost Rider in the second Ghost Rider series (1990″1998). Ketch came into touch with a motorbike that had been mystically enchanted to hold the essence of a Spirit of Vengeance after his sister was injured by ninja thugs. Blaze returned as a supporting character in this 1990s series, and it was eventually revealed that Danny and his sister were Johnny Blaze’s long-lost brothers. Blaze temporarily reprised his role as the Ghost Rider in the 2000s, following Ketch. Robbie Reyes debuted as Ghost Rider in 2014 as part of the Marvel NOW! program.

The first superhero Ghost Rider, Johnny Blaze, appeared in Marvel Spotlight issue #5 (Aug. 1972), created by Marvel editor-in-chief Roy Thomas, writer Gary Friedrich, and illustrator Mike Ploog, and was based on the Western comics character who first used the moniker. In 1973, he got his own series, with Jim Mooney doing the majority of the first nine issues. Several other creative teams came and went until penciller Don Perlin started a long run with issue #26, later being joined by writer Michael Fleisher until issue #58. The series lasted until issue #81. (June 1983). In a six-issue miniseries written by Devin Grayson in 2001, a second miniseries written by Garth Ennis in 2005, and an ongoing monthly series that resumed publication in July 2006, Blaze reappeared as Ghost Rider. Naomi Blaze and Barton Blaze had a son named Johnny Blaze, who was the previous Ghost Rider.

In Ghost Rider (vol. 2) #1, a young man called Daniel “Danny” Ketch (Johnny Blaze’s long-lost younger brother) made his appearance (May 1990). This Ghost Rider donned a black leather motorcycle jacket with spiked shoulder pads, grey leather leggings, and a mystic chain across his chest that reacted to his mental orders and served as his primary melee weapon. His new motorbike had the appearance of a future machine, with a front end that could be lowered to use as a battering ram. The wheels were made of magical hellfire, just like the original Ghost Rider’s bike. Unlike the previous Ghost Rider’s connection with the demon with whom he was bound, Ketch and his demon ” revealed to be Marvel’s rendition of the Angel of Death/Judgment in (vol. 2) #91 (Dec. 1997) ” work together. Ketch died towards the end of the series, in (vol. 2) #93 (February 1998). However, in Peter Parker: Spider-Man #93 (July 1999), it was revealed that Ketch was still alive. Nearly a decade later, Marvel reprinted the final issue and the previously unpublished (vol. 2) #94 in Ghost Rider Finale (Jan. 2007), which reprints the final issue and the previously unpublished (vol. 2) #94.