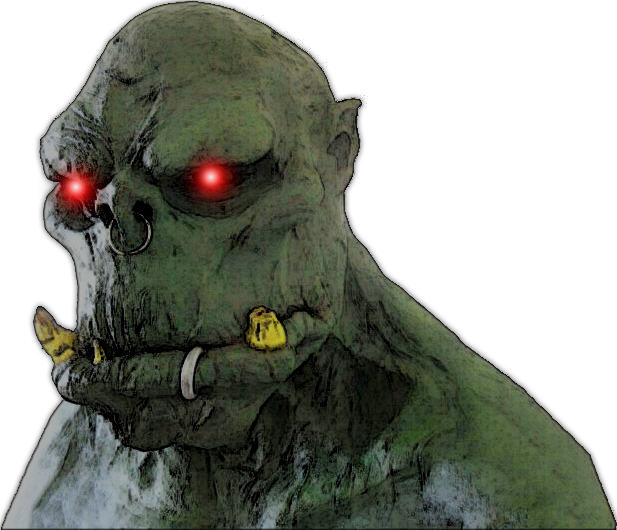 Download top and best high-quality free Orc PNG Transparent Images backgrounds available in various sizes. To view the full PNG size resolution click on any of the below image thumbnail.

An orc, like a goblin, is a fictitious humanoid creature. J. R. R. Tolkien’s fantasy books, particularly The Lord of the Rings, popularized orcs in contemporary times. Orcs are a brutish, aggressive, ugly, and malevolent race of monsters in Tolkien’s works, contrasting with the benevolent Elves and serving an evil power, though they share a human sense of morality; there is a suggestion that they are a corrupted race of elves, among several somewhat contradictory origin stories.

Mythological monsters with names that sound like “orc” may be found in Beowulf, Early Modern poetry, and Northern European folk stories and fairy tales. Tolkien said that the name was inspired by Beowulf.

Orcs have been adopted into other authors’ fantasy tales as well as role-playing and strategic games such as Dungeons & Dragons, Warhammer, and Warcraft.

The word Orcneas is translated above as “evil spirits,” although its meaning is unclear. Klaeber proposed orc L. orcus “underworld” + neas “corpses,” a combination to which the translation “bad spirits” fell short. It is thought to contain the suffix -né, which is related to Gothic naus and Old Norse nár, both of which signify ‘corpse.’ The term for corpse in Old English is lc, but -né appears in nebbed ‘corpse bed’ and dryhtné ‘dead body of a warrior,’ where dryht is a military unit. If orcus ‘corpse’ is translated as Orc PNGorcné, the meaning might be “corpse from Orcus (i.e. the underworld)” or “devil-corpse,” regarded as a wandering dead creature.

In Edmund Spenser’s 1590 Faerie Queene, a creature named Orcus is referenced. In Samuel Holland’s 1656 fairy tale Don Zara del Fogo, a parody of Spanish tales such as Don Quixote, the Oxford English Dictionary mentions an Early Modern era orke, meaning “ogre.” It is thought that ‘orke’/’ogre’ entered English via continental fairy tales, particularly from the 17th-century French writer Charles Perrault, who borrowed most of his stories and developed his “ogre” from the 16th-century Italian writers Giovanni Francesco Straparola (credited with introducing the literary form of the fairy tale) and Giambattista Basile, who wrote in the Naples dialect, claiming to be passing down oral folktales from his region. Basile used huorco, huerco, or uerco, the Neapolitan variant of Italian orco, lit. “Ogre,” to represent a big, hairy, tusked, mannish beast who could talk, resided in a dark woodland or garden, and could trap and eat humans in his stories.