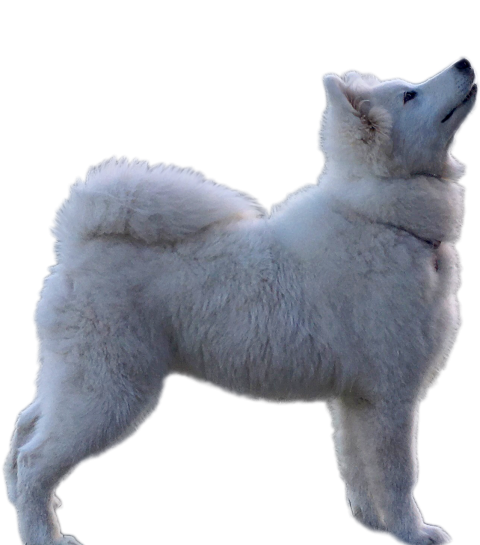 The Samoyed is a medium-sized herding dog with a double-layer coat that is thick and white. They are related to the spitz-type dog, the laika.

It is named after the Siberian Samoyedic people. The fluffy white canines were bred by these nomadic reindeer herders to aid in herding.

The Samoyed has been recognized as a primitive breed that predates the 19th century advent of current breeds. It is a member of the spitz or northern dog family, especially the laikas, a Eurasian dog breed used for hunting, herding, guarding, and sledding. The Samoyed is derived from the Nenets herding laika, a dog that comes in a range of colors in addition to white. The Samoyed, like many other breeds, was developed from a limited number of founders (in this case, from Siberia).

Samoyeds were initially employed by the Samoyede people of Siberia for hunting, herding reindeer, and dragging sledges.

Samoyed eyes are almond-shaped and generally black or brown. Although blue or other colored eyes are possible, they are not permitted in the show ring. In its family, the Spitz, it belongs to the “brown and black part.”

Samoyed ears are thick and fur-covered, triangular in form, and stand upright. They are nearly generally white, but sometimes have a light to dark brown tint at the tips of the ears (known as “biscuit”).

One of the breed’s distinctive characteristics is the Samoyed tail. The Samoyed tail, like that of the Alaskan Malamute, is coiled over the back; however, unlike the Alaskan Malamute, the Samoyed tail actually touches the back. It is frequently carried laying over the back and to one side, rather than in a tight curl or held flag-like. Samoyeds may sleep with their tails over their noses to give extra warmth in chilly weather. When they are comfortable and at peace, such as when being stroked or feeding, almost all Samoyeds will let their tails droop, but when they are more attentive, they will curl them back up.

Samoyeds have a double-layered, thick coat. Long, coarse, and straight guard hairs seem white but with a tinge of silver colour in the topcoat. The undercoat is kept generally clean and clear of particles by this top layer. The undercoat, also known as the underlayer, is a thick, soft, and short layer of fur that keeps the dog warm. The undercoat usually loses significantly once or twice a year, and this seasonal process is known as “blowing coat.” This does not mean that the Samoyed will just shed during that period; fine hairs (as opposed to the thick clumps shed during seasonal shedding) shed all year and have a tendency to adhere to cloth and float in the air. Although pure white and all biscuit dogs are prevalent, the normal Samoyed may come in a blend of biscuit and white coloration. Males’ ruffs are generally greater than females’. While this breed is advertised as “hypoallergenic,” it does shed a lot and requires a lot of maintenance. While the breed may generate less allergens, severe allergies should be avoided.